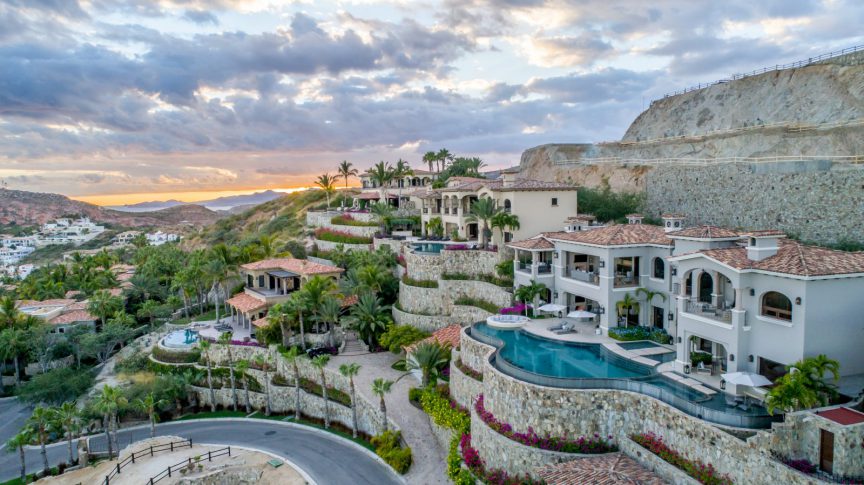 Mexico’s luxury real estate scene is on fire with no signs of cooling down. We chatted with some of the top agents in popular destinations like Cabo and Punta Mita to get their take on the hot market and where they see it going in the future.

Other new properties that have recently debuted in Cabo include Four Seasons Resort Los Cabos at Costa Palmas and Waldorf Astoria Los Cabos Pedregal. But luxury resorts aren’t the only reason buyers are flocking to the tip of the Baja. Janet Jensen, Partner and Agent of The Agency Los Cabos says many of her buyers have realized the great investment that Mexico real estate offers.

“The peso is currently favorable to the dollar,” says Jensen. “Property is still affordable and new resort-branded real estate offerings are available for those looking for amenity-based, worry-free ownership with all the perks, such as Chileno Bay Golf Club, Villas del Mar and Puerto Los Cabos. But there are also still miles of coastline with untouched beachfront for those who want to be off the grid and in the path of progress.”

While most of her buyers hail from the United States, Canada and Mexico and are on the hunt for a vacation property, many are also coming to Cabo for business reasons. “We’re seeing more and more buyers moving here to open businesses, develop real estate and take positions in the resort industry,” says Jensen.

Like Cabo, the Riviera Nayarit is also experiencing growth. A new highway will make getting around the region even easier while new developments are already drawing in buyers. Mandarina, a luxury development less than one hour north of Puerto Vallarta, will be home to One&Only’s first-ever villa collection. At the time of print, Senior Agents Jason Edwards, Joseph Antonelli and Paulina Padilla at LPR Luxury, a luxury agency based in the area, stated that they’ve nearly sold out phase one of the villas, which start at $4.5 million, with phase two set to kick off soon.

Carl Emberson, the Director of Operations and Marketing for Punta Mita says the amenities and lifestyle of his community are what’s attracting buyers, but it’s the opportunity to invest that really draws people in.

“Low taxes and cost of living are big reasons why Puerto Vallarta and surrounding areas such as Punta Mita are constantly rated as expatriates’ best places to live and retire,” he says. He goes on to state that Punta Mita specifically is a popular choice due to master developer DINE’s careful low-density planning of the community, which he says “has lasted the test of time.” Echoing LPR Luxury, Emberson says he’s starting to see owners, many of which Punta Mita is a second- or third-home destination for, add more and more weeks onto their typical visit.

Beyond luxe amenities and irresistible investment opportunities, a hassle-free journey and convenient location also play a specific role in the growing real estate scene south of the border. Emberson notes that they experience a direct correlation in homeownership percentage from markets when direct flights are announced.

“It’s the markets with direct flights that are Punta Mita’s top owners’ markets,” he says. The same rings true in Cabo. “Combine all these options with the ease of getting here and you have a truly magical destination,” says Lawrence.

Those looking to dip their toe in the luxury real estate market game should act now. “Mexico is foreign-investment friendly,” says Emberson, noting that its economy seems to be strong for years to come due to its proximity to the U.S. and a recent increase in private commercial investment. According to Jensen, most buyers tend to pay cash but bank financing and sometimes even owner financing is available. However, interest rates and loan initiation fees are higher than most U.S. buyers are used to. But those ready to invest will reap the rewards of the good life.