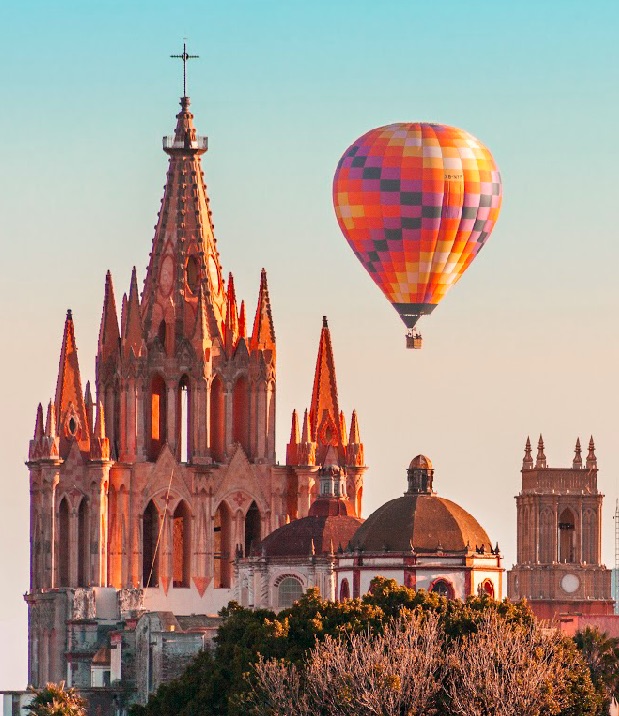 Located about 160 miles north of Mexico City, San Miguel de Allende was the first Spanish settlement in the state of Guanajuato. Founded in 1542, it became an important hub along Spain’s silver trade route. Its name comes from both Juan de San Miguel, a Franciscan monk who founded the city, and Ignacio Allende, a hero of the Mexican War of Independence. Today, the colonial-era city draws visitors with its charming cobblestone streets and Spanish Colonial Baroque architecture. In 2008, it was officially declared a UNESCO World Heritage Site.

Aside from its obvious history, San Miguel de Allende’s extreme walkability and year-round ideal weather has made it a popular destination among both locals and foreigners alike. More than 350 markets and restaurants fill the city streets with something for every taste, especially art enthusiasts. A bevy of galleries, workshops and studios are sprinkled throughout, giving colorful life to the city. Over the years, more and more visitors have made the town home. In 2019 it was voted No. 1 for Best Cities in Mexico and No. 2 for Best Cities in the World in Travel + Leisure’s World’s Best Awards. In fact, the city is often considered one of Mexico’s cleanest and safest.

Must-see sites around town include La Parroquia de San Miguel Arcángel, a 17th-century neo-Gothic church iconic to the cityscape. For some of the best views, Luna Rooftop Tapas Bar at Rosewood San Miguel de Allende is noted for its prime showcase of the structure and surrounding city. El Charco del Ingenio, a botanical garden and nature preserve, is just a few minutes from the city center and home to a large collection of rare and endangered cacti and succulent plants. For browsing local goods, Mercado de Artesanías is filled with handmade clothing, accessories, gifts and more. Former textile factory Fábrica La Aurora is also a must-shop stop, housing galleries, boutiques and cafés.

As many will tell you, there’s not a bad time to visit San Miguel de Allende. Temperatures are mild all year, with winter slightly cooler and summer characterized by some rain showers. There’s also many festivals and celebrations throughout the year, especially around holidays like Easter and Christmas which tend to attract many visitors. And since San Miguel is the birthplace and hometown of Ignacio Allende, it’s a joyous place to be on September 16, Mexico’s Independence Day.

This article originally appeared in the 2019 Fall/Winter issue of InMexico Magazine.