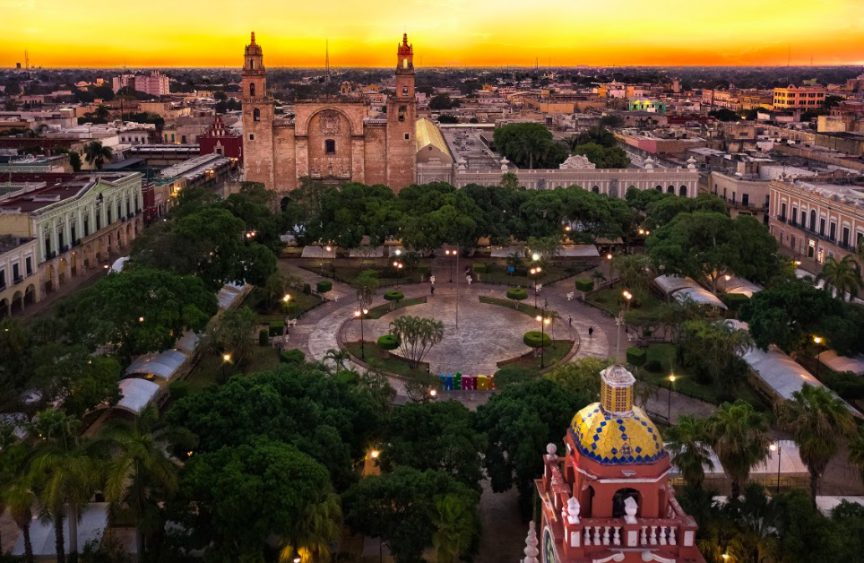 Merida, the capital of Yucatan, was once the epicenter of Mexico and perhaps the world, displaying its wealth in the most ostentatious fashion. Called the “Green Gold” era, this agricultural boom was nearly as important as the California Gold Rush was to America and fueled the city’s rise from the ashes of the ancient Mayan city Th’o to a cultural and financial center for nearly 100 years.

“Green gold,” as it was referred to by many was the indigenous plant used for centuries by locals to create a natural fiber to be woven into many uses worldwide. Most know it today as sisal. This product comes from the henequen plant grown on huge plantations called haciendas that surrounded the city. These plantations have all but vanished and now appear like ghostly images of a bygone era outside the city walls.

But at the height of the boom, the money came rolling in, as did the architects from France and Italy. Keeping up with the Joneses took on a new meaning here as hacienda owners built mansions and palaces, each one bigger and better than their neighbors. This elite group of savvy business leaders, known as the “Casta Divina” (Pure Class), controlled the city with a fashionable and stern hand. Their palaces were built to last and, after some renovations, we can almost experience today how they appeared nearly 100 years ago at the height of their time.

The zocalo (town square), located in the heart of Centro, is the hub of all life in the city. Flanked on four sides by historic buildings, some dating back to the 16th century, this area is second only to Havana and Mexico City for colonial architecture. No visit is complete without touring the home of Francisco de Montejo, Merida’s founding father, on the south side of the square or sitting quietly and reflecting under the Moorish vaulted ceiling of one of the largest and oldest cathedrals in the Americas. It’s awe-inspiring no matter what your beliefs are.

Take a stroll along the famed Paseo de Montejo, a tree-lined boulevard fashioned after the Champs-Élysées in Paris. The sheer size and attention to detail in the structures found here attract thousands of visitors each year. The Canton Palace, which has been painstakingly restored, is now the Museum of Anthropology and History and the crown jewel of the neighborhood.

For centuries, Merida was in isolation from other parts of Mexico and was considered too far away and too hot to move to. But all things come to pass, and Merida is welcoming the change. Today, Merida is rising again and is back in play. Pick up any “best of” lists and it’s sure to top the most livable city in Mexico and perhaps the world, once again making its comeback as the place to visit, invest and retire. With a population of nearly one million residents, the city is a contrast of the old and new culture, the local and expat, and the north and south, if you will.

For years Merida was the holdout for artists, writers, students, archaeologists and expats living off the grid. The rebirth of the city has locals clinging to the past and embracing a new and improved Merida. Enjoy a cappuccino at a sidewalk café, stroll through a New York-style art gallery or just enjoy a Guinness in an Irish pub; the diversity in this city is overwhelming.

The area known as “The North” has seen unexpected growth in the past few years. No more the colonial city of culture, it’s now a world-class destination with restored haciendas that have been turned into five-star properties, renovated homes that are now boutique bed-and-breakfasts, shopping areas inspired by Dubai, world-class medical facilities and residential subdivisions with custom homes rivaling those north of the border.

If Merida is not on your bucket list, then perhaps a revision is needed. For the adventure-seeker, international lover of food, real estate speculator or just ultimate spa enthusiast, you can’t go wrong. Named the American Capital of Culture in 2000 and 2017, what will Merida bring in 2020?

This article originally appeared in the 2019 Fall/Winter issue of InMexico Magazine.